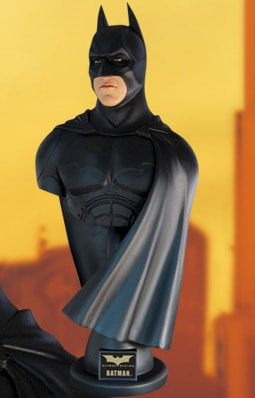 "Hot Toys · Bust" born by innovative ideas of Hot Toys. Batman appears from "Batman Begins" depicting the secret of Batman in this series which makes a character three-dimensional on 1/4 scale!

Bruce Wayne, the protagonist who fights against the rogues wearing bat suits to defend Gotham City. He faithfully reproduces His figure in the play by the solid technology of Hot Toys. It's a gimmick and innovative lineup that allows you to adjust the angle, albeit somewhat. This item is limited to 2,500 Japanese limited items, and it is a gem only available in "Batman Begins" Blu-ray Limited Edition released in Japan from Warner Entertainment Japan Ltd. Warner Home Video.