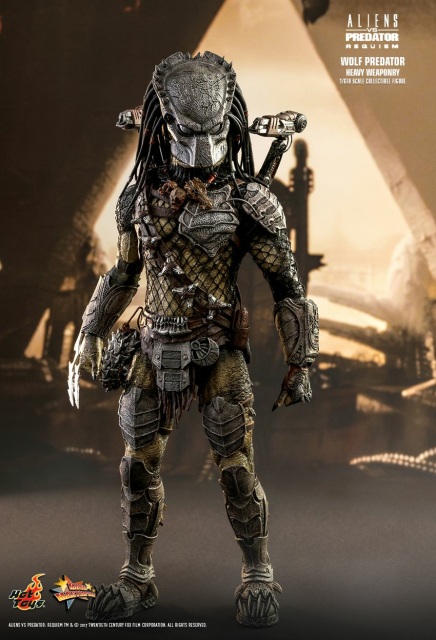 Continuing the occurrence of Alien vs. Predator, a Predator scout ship carrying Predalien and facehuggers has crashed on Earth, causing the spawn of the chestburster in Aliens vs. Predator: Requiem. Wolf Predator, has responded to a distress signal, travelled to Earth and planned to kill all Aliens. As the elite member of the Predator, he has proven himself as a daunting warrior and dreadful hunter with a large collection of trophies from many different species and large arsenal of weapons! He has remained one of the most popular warriors in Alien vs. Predator series among fans.

- Over 20 points of articulations

- One (1) pair of forearm armor with weathering effect

- One (1) bandolier with pouch and 5 pieces of Claymore Mines

- One (1) left shoulder and chest armor

- Three (3) Shurikens (in closed mode, attachable to the bandolier)

- One (1) whip (in curled up mode, attachable to the bandolier)

- One (1) Dissolving Liquid (attachable to the pouch on the bandolier)