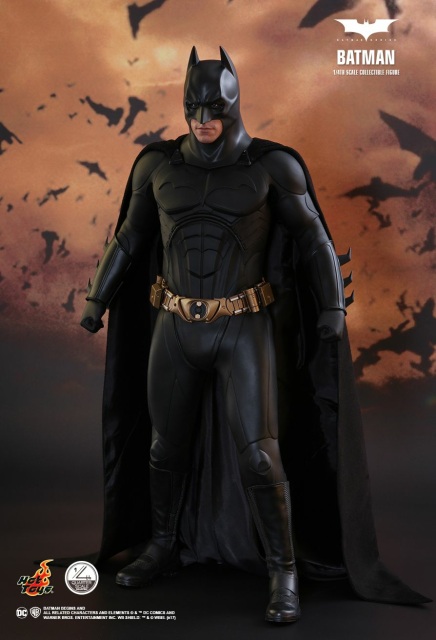 “It's not who I am underneath, but what I do that defines me.”

Batman Begins marks the beginning of one of the best superhero trilogy of all times. Fans around the world are fond of the story of Batman, his path to stop crimes in Gotham City, and of course, the Batsuit. Directed by world renowned filmmaker Christopher Nolan and starred the fan-favorite actor Christian Bale, the Dark Knight trilogy has gone on to become a timeless classic for Batman fans worldwide.

Given the immense popularity, Hot Toys is pleased to officially introduce the 1/4th scale Batman from Batman Begins today!

The 1/4th scale Batman collectible figure is such a timeless masterpiece, it is definitely a treasure for all Batman fans. Pre-order now before it’s too late!

- One (1) newly developed head sculpt of Christian Bale as Bruce Wayne in the movie with accurate facial expression, detailed wrinkles and skin texture

• One (1) right hand for holding Batarang

- One (1) utility belt with metal buckle

- One (1) pair of forearm gauntlets

Weapons (detachable from the utility belt):

- One (1) set of full gear climbing harness and belt

- One (1) all-in-one cell-phone and palmtop computer

- One (1) balaclava for wearing on the Bruce Wayne head sculpt