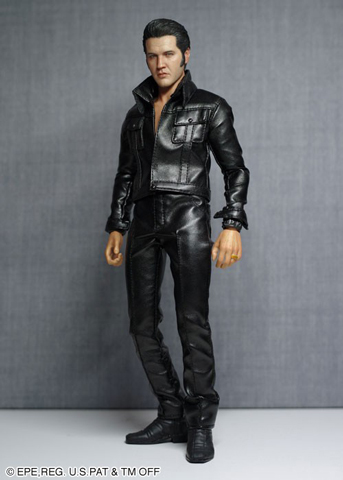 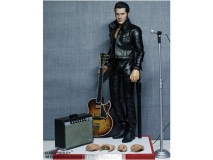 Kotobukiya and Enterbay have teamed up in a collaboration to bring you the one, the only ELVIS PRESELY® in this ELVIS ‘68 COMEBACK SPECIAL action figure.

Elvis, starring Elvis Presley, was the title of a 1968 United States television special. Sponsored by The Singer Sewing Machine Company, it aired on December 2, 1968 on the NBC television network. The special is commonly referred to as the ‘68 Comeback Special, because of subsequent developments in Presley’s career, but the soundtrack album was released simply as NBC-TV Special. Steve Binder and produced by Binder and Bones Howe. Presley’s informal jamming in front of a small audience in the ‘68 Comeback Special is regarded as a forerunner of the so-called ‘Unplugged’ concept.

Elvis Aaron Presley (January 8, 1935 - August 16, 1977) was one of the most popular American singers of the 20th century. A cultural icon, he is widely known by the single name Elvis. He is often referred to as the “King of Rock and Roll” or simply “the King”.

Presley’s first RCA single, “Heartbreak Hotel”, released in January 1956, was a number one hit. He became the leading figure of the newly popular sound of rock and roll with a series of network television appearances and chart-topping records.

Presley is regarded as one of the most important figures of 20th-century popular culture. He had a versatile voice and unusually wide success encompassing many genres, including country, pop ballads, gospel, and blues. He is the best-selling solo artist in the history of popular music. Nominated for 14 competitive Grammys, he won three, and received the Grammy Lifetime Achievement.

-Based on the appearance in the ‘68 Comeback Special, Elvis’s looks and clothing have been painstakingly recreated in this highly detailed action figure with clothes made from real cloth

-Accessories include: the microphone and stand, guitar, speaker and a display base designed to look like a stage

-RM5.01 action body, which is highly posable with over 30 points of articulation to create a wide variety of display options

-Each piece is numbered with a special commemorative hologram sticker; ideal collectible item for anyone who loves the King of Rock and Roll