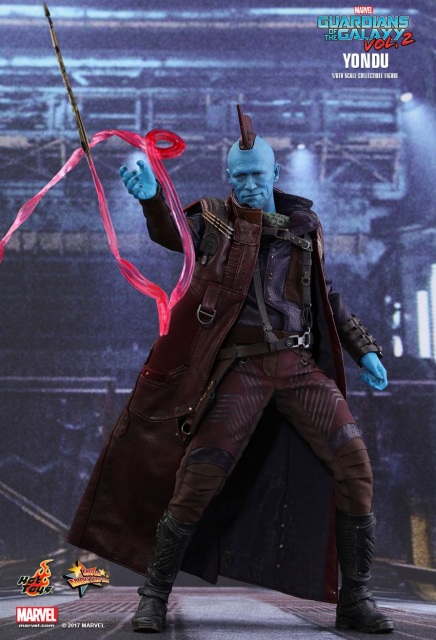 Once a Ravager, forever a Ravager. Yondu will always remain in our hearts. Years ago when Yondu were actively involved in child trafficking in Ego’s quest, Captain Stakar exiled him for violating the Ravager code. But after knowing the terrible fate the child will face, Yondu chose not to deliver Peter Quill (Star-Lord) to Ego and raised him instead; even sacrificed himself to save his beloved son Star-Lord. Today, Hot Toys is pleased to dedicate to Marvel fans the 1/6th scale Yondu collectible figure in memory of his selfless act and his loyalty as a Ravager from Guardians of the Galaxy Vol.2.

Expertly crafted based on the image of Michael Rooker as Yondu in the well-reviewed blockbuster, the 1/6th scale Yondu collectible figure is just phenomenal, highlighting the remarkable likeness. The figure features a newly developed head sculpt, interchangeable magnetic fin and the new “prototype” fin, a intricately tailored and highly detailed costume, a pair of suspenders with arrow holster, a dagger attached to the wristband holster, a specially designed figure base, and a miniature Baby Groot attacking in his Ravagers outfit!

Now, head onto pre-order and own this meticulously crafted Yondu collectible figure. This new Guardian will be one of the coolest additions to your marvelous collection.

- Newly developed head sculpt with authentic and detailed likeness of Michael Rooker as Yondu in Guardians of the Galaxy Vol. 2

- One (1) interchangeable fin with magnetic feature

• One (1) pair of hands for holding the leather-like jacket

• One (1) pair of hands for holding Yaka Arrow

- One (1) pair of suspenders with arrow holster

- One (1) pair of black boots with articulation on the ankle

- One (1) dagger (detachable from the wristband holster)