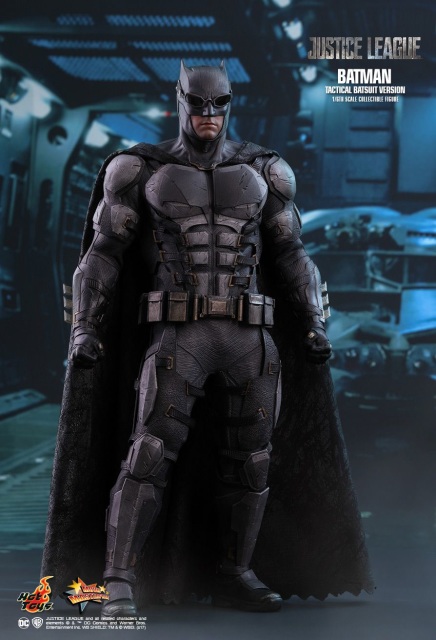 “I'm putting together a team of people with special abilities.”

Ahead of Justice League’s release in about 3 months, the highly anticipated blockbuster has already gained a huge buzz globally. As the continuation of Batman v Superman: Dawn of Justice, Batman is awakened and inspired by Superman’s selfless sacrifice, he is determined to form a league with Wonder Woman, Aquaman, Cyborg and the Flash to fight for justice against their new enemy and maintain peace on Earth.

With Batman as one of the most popular characters in DC Comics, Hot Toys is proud to present to fans our latest 1/6th scale Batman (Tactical Batsuit Version) collectible figure prior to the release of Justice League!

A Special Edition will be available for selected markets which includes an additional Human Mother Box as bonus accessory.

Unite the league today with Batman. Pre-order now and make sure you don’t pass up on such an impressive collectible figure.

• One (1) pair of hands for holding weapons

• One (1) right hand for holding Batarangs

- One (1) pair of black boots with grey-colored armor plates

- One (1) Human Mother Box (This Special Edition is for selected markets only.)