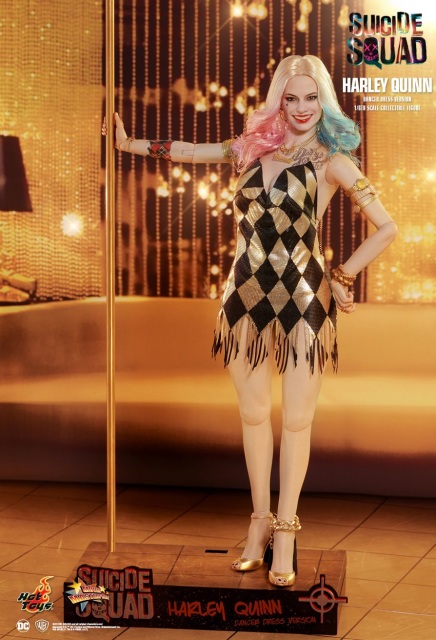 “The one, the only, the infamous Harley Quinn!” – The Joker

Being one of the most beloved female villains in DC Comics, fans worldwide are enthralled by Harley Quinn’s madness and her psychotic personality. Established herself as the Queen of Gotham City with the Joker, Harley Quinn made another remarkable entrance at the night club magnificently decked out in her beautiful dancer dress pole dancing for the crowd. Today, Hot Toys is excited to present the latest 1/6th scale Harley Quinn (Dancer Dress Version) from the DC Extended Universe blockbuster Suicide Squad!

It’s time to dress up your shelve with the phenomenal 1/6th scale Harley Quinn (Dancer Dress Version) collectible figure along with other Suicide Squad characters! It’s a chance you shouldn’t miss!

- One (1) pair of gold and black high heels shoes

- One (1) gold colored bangle (wearable on the right arm)